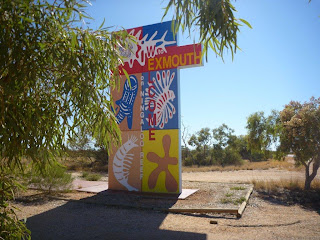 Before we left on this trip around Australia we had only heard about the
sights to be seen on the Western Australian coast from television shows such
as Getaway. However, during our travels we have read various forums (mainly
www.exploroz.com) and the blogs of numerous people and the name Ningaloo
Reef became well known to us and clearly we needed to include this on our
trip.

The Ningaloo Reef is 260 kilometres long and is Australia's longest coral
reef and the world's closed reef to land and is easily accessible as in some
places the reef is just 500 metres from shore. We took the side trip off
the North Coast Highway to travel to Exmouth and then around the tip of the
peninsula to Cape Range National Park which borders the Ningaloo Reef Marine
Park which is now a world heritage area.

After a long and hot day of travelling from Carnarvon (some 450 kilometres)
it was great to see this welcome sign. We could have made a stop at Coral
Bay as we commenced the trip up the peninsula but it was getting late in the
day and we still had a way to travel so we continued towards Exmouth. Some
people say we missed a treat and should have stopped at Coral Bay for a few
days but we will have to consider that for another time if we happen to be
this way again.

Many people, mainly from the Perth area, make Coral Bay and Exmouth, and the
reef area their winter home. The winters are very mild with temperatures
averaging in the high twenties in June during the day and around fifteen at
night. Added to the temperate conditions is the appeal of the fishing in
the area - some of the best in Australia. We camped beside one couple while
in Carnarvon, who travelled from south of Perth and were heading to the
Ningaloo Coast for five months. They do this each year and they fish away
the winter!

We soon learned that they were not the only ones as many campers we have
spoken to have plans on stay for at least a month if not longer. Great if
you can do it. We have doubts now whether we want to experience a winter
again - this seems a much better option.
Posted by Just Keep on Traveling at 5:17 AM