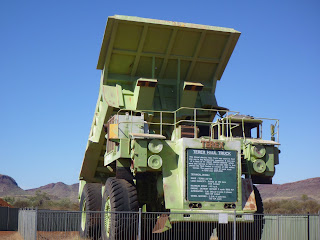 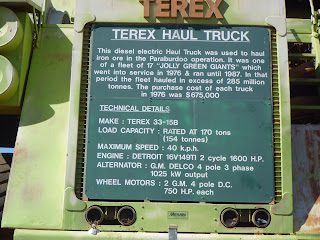 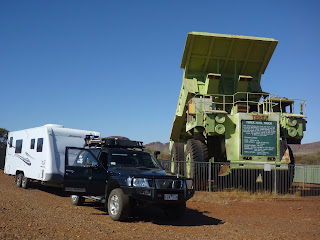 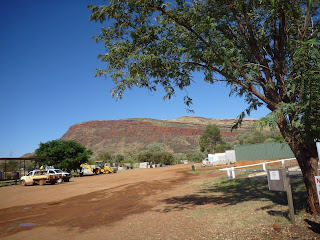 After stopping overnight at a rest area about 100 kilometres from Paraburdoo
we continued our journey. This area has some of the world's largest open
cut mines as well as some of the largest cattle stations in Australia.
Paraburdoo has a population of approximately 2000 and a significant fly in /
fly out population servicing the mines. There is a small airport which is
used for both Paraburdoo and Tom Price, the second town in the area which is
100 kilometres further on.

We stopped when we saw this huge haul truck we had to stop and take a photo
and also to give an impression of the size of this vehicle we parked the
Patrol and the caravan alongside it. It was pretty impressive.

From here we continued into the township. The houses are all pretty bleak -
no gardens and very few with lawns and the red sandy soil. The housing is
mainly mine housing and is all very similar. We stopped at the small
shopping centre and did some shopping at the IGA and as there was a
hairdressers Peter was able to get another short haircut.

We then continued on to Tom Price - another mining town although bigger with
a permanent population of 3500. There are certainly plenty of mine vehicles
up this way!
Posted by Just Keep on Traveling at 7:06 AM