Thanks and have a Great Christmas and a Fantastic 2012

To everyone who has followed our little trip "thanks" and we hope that you have enjoyed our trip thus far.  We have completed stages one and two - 19270 kilometres of a six stage trip around Australia which has taken us four and a half months.  We are going to be off the road now until late February or early March (while we enjoy some time in New Zealand meeting up with family and friends) so we hope you enjoy your Christmas and New Year. The Patrol will be repaired and back in Melbourne ready to allow us to continue our trip on our return.  We are looking forward to the next 40,000 or so kilometres 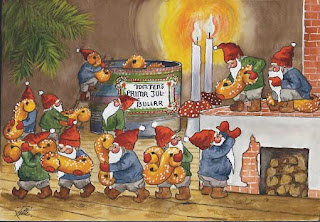 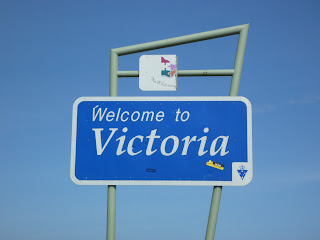 As soon as we passed the Farewell to South Australia sign the Welcome to Victoria was upon us.  To think we had now returned, via a different route, to our home state of Victoria.  Since our trip commenced on 4 July we had left Victoria, visited ACT, NSW, Queensland, Northern Territory and South Australia.  At the border there was information on how the borders were surveyed and the survey instrument was on display.


We had a short stop at the Princess Margaret Rose Caves.  We had planned on taking the cave tour but the timing wasn’t right for us.  Instead Peter decided to have a cook up of bacon and sausages for a late lunch.  He was soon very disappointed when he found that for some reason either the case cylinder or the gas cooker wasn’t working.


We continued on and booked into a motel in Portland for the night.    Like the other towns we had called into, Portland was settled as a port for the coastal ships transporting grain and other goods.  It is still a major port today and the township supports the large rural area.  There is a lot of dairy farming.


Sunday morning we commenced the last segment of our trip back to Melbourne.  We made the decision not to take the Great Ocean Road as we have travelled that route a number of times.  Instead we took the inland road through Colac.  Firstly we stopped off at “The Crags” which is a coastal area and very similar to some of the inlets on the Great Ocean Road.  The sausages and bacon that Peter had planned on cooking the day before were still in the Engel fridge so as soon as he found a roadside area with BBQ’s and tables etc we pulled over the he cooked up a treat.


The freeway now bypasses Geelong and soon we could see the skyline of Melbourne in the distance.  A quick stop on the freeway allowed me to take a photo of the “Welcome to Melbourne” sign.  We do love Melbourne and it was great to be back.  We are staying with Sandra and Richard and the family, and it was great to see them, and we had a glorious welcome when we arrived in Frankston. 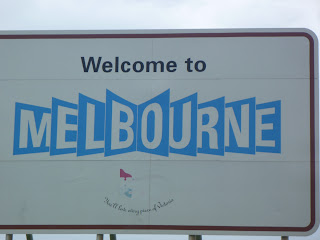 Posted by Just Keep on Traveling at 1:13 AM No comments: Links to this post

Email ThisBlogThis!Share to TwitterShare to FacebookShare to Pinterest
Labels: VIC

After discussions with the insurance company and the repairers of our vehicle, Augusta Automall in Port Augusta, we decided it was time for us to leave Port Augusta and travel back to Melbourne.  It was agreed that once the Patrol was repaired that the insurance company would transport the car back to us in Melbourne.  The first task was to move the caravan from Shoreline Caravan Park into storage at Irving Secure Storage.  We have been amazed at the help people have provided us.  Alan from Irving Secure Storage came to the caravan park and towed the van for us – this was wonderful as the rental car did not have a tow bar and we didn’t want to have to bother RACV who had offered to arrange a tow truck if necessary.
So we have left the Patrol in the hands of the wonderful team at Augusta Automall - Janelle is one of the customer service assistants and she, along with Sheree, has been extremely helpful.


The drive from Port Augusta to Adelaide is approximately 300 kms.  We had previously travelled some of this road when we went to Yorke Peninsula so we made the trip with no stops.  The road passed some amazing salt lakes and these appeared to have a pink tinge.  We stayed overnight at a motel as we had decided that we wouldn’t bother tenting on our return to Melbourne.  Peter has already blogged that we had left some documents in the caravan by error so early on Friday morning he made the return trip to collect them – so annoying.  I had a lazy morning and after checking out of the motel made my way down into the city.  I visited Central Market and wandered around the city central including Rundel Mall.  Adelaide is the home to Haigs Chocolate and it seemed that there was a chocolate shop on every corner.  It was the 11th November so I made my way to the War Memorial.  It was interesting to see so many people just stop in their tracks at 11 am to commemorate the one minute silence.
Around 2 pm I met up with Pete and we went to Hahndorf – a village settled by the many German settlers on their arrival in this country at the turn of the century.  The village is now a popular spot for tourists who enjoy the German shops and cafes.  Walking in these shops just reminded us of being in Germany and the coffee was pretty good too.
We then commenced our trip to Robe on the Limestone Coast.  We just loved this coastline – we stopped off at “The Granite Boulders” expecting to see something like the boulders we had seen in Central Australia.  Well the boulders are a little similar but we were surprised to see that there were only six of them.  Still it was worth it – they are the only boulders on the south coast on an otherwise sandy coastline.
At Kingston we saw the “Big Lobster”.  It is looking a little tired and needing some repairs but it was still impressive.  We drove through the township – again it has a jetty and lovely foreshore.  We saw the Cape Jaffa Lighthouse and we were surprised to learn that the lighthouse had actually been moved to that site.  It was getting late in the day so we travelled on to Robe where we stayed overnight.
We had particularly wanted to visit Robe as the 4wd club we were members of in Melbourne arranged trips to Robe for sand driving.  Of course this was not going to happen for us on this trip as we are travelling now in a Toyota Camry rental car.  We drove to the lookout and to the edge of the access on to the beach and chatted to a guy who was heading for a day of fun driving and fishing.  He said that it was possible to drive from Robe to Beachport along the beach – a distance of about thirty kilometres along the beach.
The landscape in this part of South Australia is very similar to New Zealand.  As we drove from Robe to Beachport we came around a bend and came across two black heifers wandering along the road – it made a change from kangaroos and emus!  We stopped to see the Woakwine cutting and the machinery used.  It was incredible to think that a local farmer and another man would consider making such a cutting to allow the water from his property to drain.
We fell in love with the small town called Beachport.  It has a long jetty (as is the case with most of the South Australian coastal towns) and beautiful beach areas.  The caravan park is beach front and looked really nice.  We spent ages wandering around the jetty and beach and stopped for coffee at one of the beach front cafes.  From here we made our way to the Beachport Conservation Park – this was a really interesting shoreline and we would have loved more time to explore.
We knew that we were at the opposite end of the beach 4wd track from Robe to Beachport – we saw one vehicle down on the beach, get stuck and then fortunately got going again.  We were disappointed that we couldn’t head down the track!  We stuck to walking it a short distance instead.
From here we stopped off at Southport – again it is a small coastal village (with a population of under 300).  Again the coastal area, named Cape Buffon, was just great to wander and of course there was a jetty.
We continued our journey towards Victoria and made a short stop at Piccaninny Ponds.  We were unsure what we were going to see and when Peter saw the sand track to the beach was tempted to drive the 2wd rental car up the track – that was soon put a stop too!  Other than a cyclist there was no one else at this isolated spot.   From the beach we took the track to the Ponds and found that the pond has a large underwater cavern and is popular with divers and for snorkelling.  You would have had no idea from the road signage.
Soon after we returned to the main road we saw the signage – Farewell to South Australia.  We had really enjoyed our trip along the Limestone Coast which is both rugged and has sheltered beaches.

Posted by Just Keep on Traveling at 11:36 PM No comments: Links to this post