Our camping spot at Whale Bay 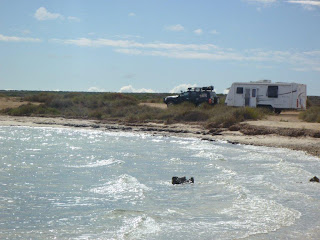 We are never in a hurry to leave in the morning - we don't have any set
timetable or itinerary so it doesn't matter when we set off. On this day
(Saturday, 29th April) there had been four groups camping at Whale Bay.
There was a large fifth wheeler and the owners had disconnected it from
their vehicle and had taken off presumably into Denham for the day. There
was a young guy travelling on his own in an old van, and the camper trailer
with the family.

You can see from the photo how close to the water we were able to park. It
was just lovely and by 9 am we were the only people still in the bay. It
would have been lovely to have been able to stay another night but the rules
say twenty four hours only so we had to move on. We waited until late
morning and then reluctantly headed off.
Posted by Just Keep on Traveling at 2:37 AM