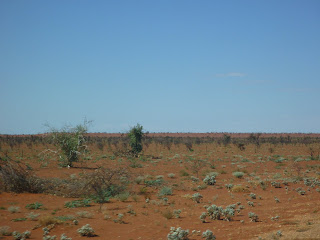 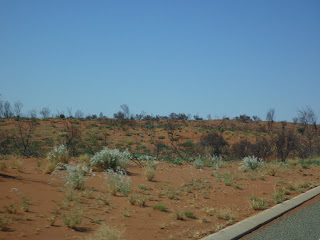 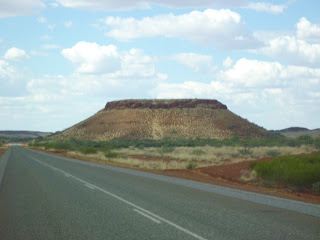 As planned on Tuesday morning, after just one night in Exmouth, we packed up
and left camp and commenced our journey towards Karijini National Park, a
distance of nearly 700 kilometres. To travel to Karijini National Park,
which is the second largest national park in Western Australia, we have to
divert from the coastal road inland about 400 kilometres and then continue
north to Port Hedland. We could back track to the coast road, some 400
kilometres, so that we travel through Karratha but decided that Karratha did
not hold that must interest for us to travel the extra thousand kilometres.

Travelling the connecting road from Exmouth to the Great Northern Highway is
about 200 kilometres and the landscape varied from red desert with spinifex
to red rock mountain ranges. There was even a large hill with a flat
plateau top. Again we travelled 550 kilometres from Exmouth to Paraburdoo
without any other small towns or houses on the way - just the very
occasional signpost to a station but we never saw any homestead.
Posted by Just Keep on Traveling at 7:09 AM