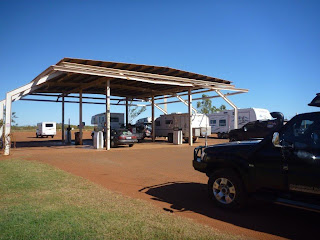 For travellers in the outback of Australia the roadhouses are very
important. The distances between any towns can be many hundreds of
kilometres and the only place to refuel is at the roadhouse. The
roadhouses also stock minimal food items (although the bread is always
frozen and there is no fresh milk, again a result of the distance from
town), flushing toilets (which are very popular) and at some showers are
available at a small cost. The majority of the roadhouses also have very
basic accommodation and sometimes a caravan park. Of course the price of
fuel is always higher, but at least it is available. You can see from this
photo how popular the stop is for travellers.

This is a photo of Pardoo Roadhouse which is 150 kms north of Port Hedland
enroute to Broome. There are no towns as such between Port Hedland and
Broome but at least three roadhouses along the 600 kms highway. Pardoo
Roadhouse was apparently damaged severely during a major cyclone in March
2012 and the damage can be seen to the steel brace at the top of the canopy.
Photos of the damage were also on display in the roadhouse.

This roadhouse is at the intersection where we turned to go the ten
kilometres to Cape Keraudren. Campers staying at the cape must supply their
own water, and well water can be obtained from the roadhouse after payment
of a donation to the Royal Flying Doctors Service.
Posted by Just Keep on Traveling at 12:20 AM