We have finally seen a snake 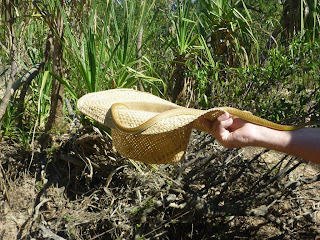 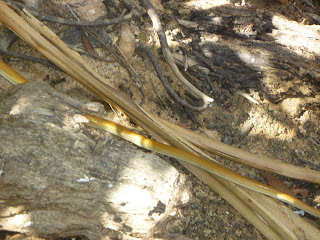 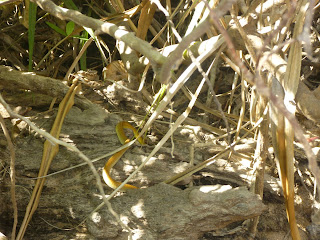 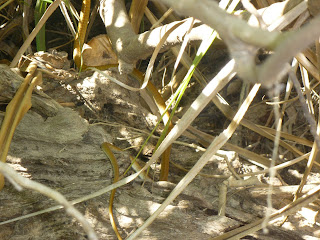 While I was sitting in the warm water at Douglas Hot Springs (and Peter was
standing in shallow water ready to climb out) a couple sitting on a small
island alerted me to a snake. The guy had seen it and had encouraged it to
go into his hat and he had it climbing up his arm. He was much braver than
me but he was confident it wasn't poisonous. I have no idea what type of
snake it was.

It soon fell out of the hat and started making its way back into the bushes
beside the water. Because of the yellow colouring it didn't take long for
it to camouflage with the dry plants. It would have been well over a metre
long and quite skinny.

I have now seen a snake during our travels - as for Peter. Well he was
well away as soon as the word snake was mentioned and was quite convinced
that I would get too close. I am not that stupid.

Next stop is Darwin, just 180 kilometres north. We have booked into the Big
4 at Howard Springs for four nights and will meet Connor who is coming
tomorrow to stay with us for two weeks. We plan to visit Kakadu and
Litchfield National Parks and look around Darwin during this time. It is
still school holidays for a few days so hopefully there will be some other
boys in the various camping areas so that Connor will have some company.
Posted by Just Keep on Traveling at 5:16 AM