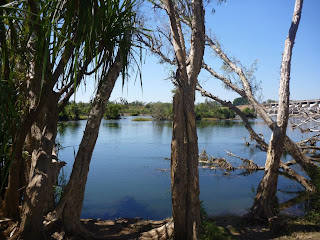 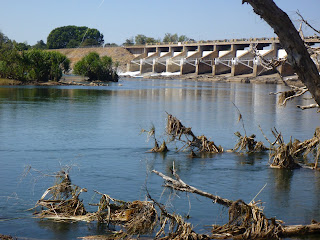 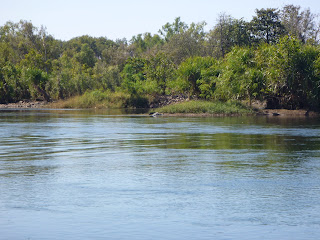 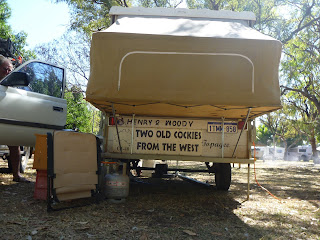 After a couple of days at Parry's Creek we drove into Kununurra which is the
largest town in the part of Western Australia. It has a population of
around 7000 with a lot of Aboriginal people. The town also houses some of
the people working in the local mining projects. There is a large park area
in front of the IGA and this is a popular sitting place for the Aboriginal
people.

The Ord River dominates the Kununurra area. We stopped at Lion Park on the
entrance into Kununurra and saw the dam. We thought this would be a good
place to camp but no camping was allowed which was a little disappointing.
However we soon changed our mind when we saw a crocodile sunning himself on
the opposite bank.

Water is in abundance in Kununurra. We stayed in Ivanhoe Caravan Park and
we were surprised to see the sign "water is free in Kununurra". We were
asked to water our sites each day to keep the grass growing. After living
in Melbourne for a number of years with water restrictions it is hard to get
your head around being able to use water freely. Peter decided that the
water wasn't good enough to wash the car or the caravan - not sure how he
made that decision but it saved him a task.

Pete made friends with a couple of guys who were travelling Western
Australia. They were farmers from south of Perth and had left the farms in
the care of their sons while they travelled. Pete enjoyed their company and
loved the signage on the back of their camper.

The weather continues to be great - we have not had any rain since we were
in Esperance in March. What is rain?
Posted by Just Keep on Traveling at 6:41 PM