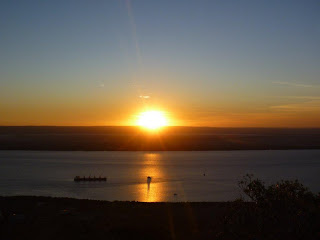 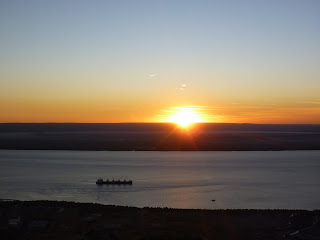 One thing we have learnt since we have been in Western Australia is that
each town is proud of their sunset and Wyndham is no different. The sunsets
around 5.30 p.m. and we had been told to drive to Five River Lookout to
photograph it. The road was quite steep and we were not the only tourists
as there were about twenty others already there, some with wine and nibbles.
We were not that organised!

From the lookout there is a great view of the five rivers that join the
Cambridge Gulf - the King, Ord, Pentecost, Durack and Forest Rivers. There
are saltwater crocodiles in the waters so there is no swimming. We could
see the ship that was being loaded with the iron ore ready to depart to
China.

Again the sunset was pretty impressive so the customary photos had to be
taken.

There is to be a music concert held at the lookout this coming week-end. We
understand that tickets at $120 have been sold covering the meal and music.
Posted by Just Keep on Traveling at 5:08 AM