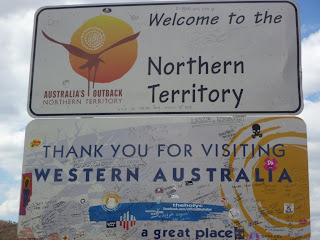 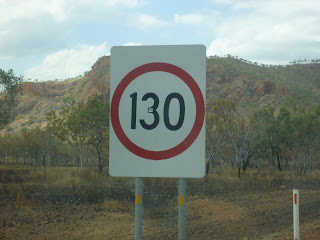 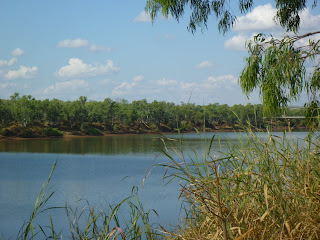 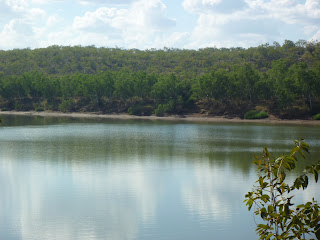 We continue our journey towards the east and just one hundred kilometres or
so from Kununurra we reached the Western Australia / Northern Territory
border. There is an agriculture quarantine at the border but we weren't
required to stop - they only appeared interested in what was being taken
into Western Australia not what was taken out. Unfortunately the state
signs had a lot of graffiti. The next sign was the increase in the speed
limit to 130 kph - we are certainly in the Northern Territory but we won't
be driving at anywhere near that speed. We normally sit around 92 kph with
the caravan on.

We were sad to say good bye to Western Australia as we have thoroughly
enjoyed our five and a half months of travelling in this state. It is a
very diverse state with a huge number of kilometres to drive. Who knows, we
may visit again one day.

Fortunately we have a GPS and it was immediately updated with the time
change between the two states. We knew we had a time change, but there is
no signage to tell you how much. We thought it was half an hour, but we
were wrong. It was one and a half hours. No it is not lunch time - look at
the clock it is getting towards dinner time.

The road from Kununurra towards Katherine which is where we are heading is
quite an interesting road. It passes through two small settlements, Timber
Creek (population 70) and Victoria River with fuel and a general store at
each. The road passes through the Gregory National Park with spectacular
escarpments and follows the Victoria River for some of the way. The Victoria
River is very wide in some parts and apparently is nearly a kilometre wide
at its widest but we didn't see that. Water is abundant in this part of
Australia.

We stopped briefly at Timber Creek. There were a lot of local folk standing
around as the Greyhound bus was stopped. We watched as a group of little
Aboriginal children were playing - they were making some mud out of the dirt
and throwing it at the signage. The little boy would have been three if he
was lucky and he was pretty accurate with his shots but what a mess of the
sign and the pavement he was making. Again no photos - we need to be
culturally sensitive.

We stayed overnight at one of the National Park camping areas - pretty basic
but was okay. It is surprising how full the camping areas get and our first
choice had been an area called One Horse Creek but that was full so we had
to continue on. There would have been about fifteen groups staying
overnight at Sullivans and we wandered down to look at the river. Again
there were crocodile signs and a guy standing bare foot in the river. We
were even dubious about following the track through the long grass down to
the water edge in case there were snakes!
Posted by Just Keep on Traveling at 8:34 PM