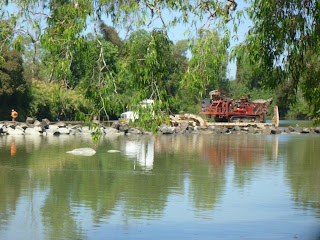 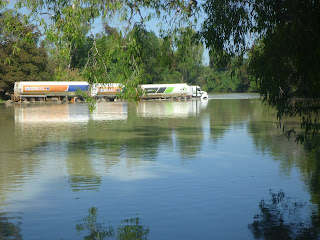 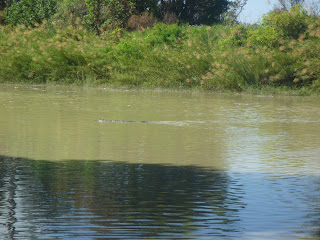 After walking at Ubirr we stopped off at the boat ramp on East Alligator
River for a picnic lunch. There were a number of people about, some were
fishing for barramundi but we didn't see any caught. We were upstream from
Cahill Crossing which is a vehicle causeway leading to Arnhem Land. While
we were at the boat ramp a number of vehicles crossed the causeway including
a haulage truck with mining equipment on the trailer and a fuel tanker.

There were quite a few local Aboriginal people on the opposite bank of the
river fishing - again no photos as culturally insensitive. We did see some
people (white people who don't read notices) standing on the causeway and on
the river bank fishing. We were really surprised at this as the river had
crocodiles and we saw at least six and the saying is it isn't the crocodiles
that you can see that you need to worry about, but the crocodiles you can't
see.
Posted by Just Keep on Traveling at 8:39 PM