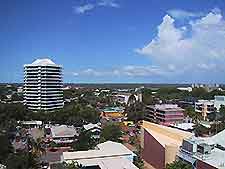 As Connor is only with us for two weeks he is trying to make the most of taking the opportunity to swim in the warm weather.  Each day he has had at least two swims or maybe three in the caravan park pools. 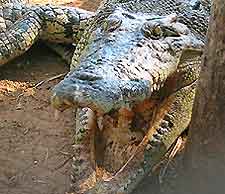 Darwin enjoys a really tropical climate.  However as there are saltwater crocodiles in the coastal waters swimming at the beaches is not possible.  We have noticed that many of the private residential homes have swimming pools and there must be no better city in which to get full use from a private swimming pool.
The other thing you notice about Darwin is that following the 1974 cyclone which destroyed more than 70% of the buildings that there are very few older buildings.
We had visited the Darwin Museum and Art Gallery after our visit to the Defence Museum.  Unfortunately no photography is allowed.  We had two exhibitions that we were particularly interested in seeing.  One was "Sweetheart" which is a 5.4 metre male which became famous for attacking outboard motors on local fishing boats.  Sweetheart was eventually trapped by Park Rangers in July 1979 but unfortunately during an attempt to haul him ashore he became entangled with a sunken log and drowned.  Following the skill of the taxidermist Sweetheart is on display in the museum.

The second display we had come to see was the Cyclone Tracey exhibition.  Both Peter and I were able to tell Connor a little about the cyclone as we remembered the occasion on Christmas Eve in 1974.  The exhibition is well worth visiting.  Most of the Darwin population of 48,000 was made homeless by the highest winds ever recorded on the Australian mainland.  There is documentary footage, examples of the early architecture (from the rebuild following the 1942 bombing), photographs and sound recordings.  There is small room set aside where in the dark an actual recording of the wind and cyclone is played - a very scary experience.
The foreshore area around the central business district has recently been completely rebuilt.  There are a number of new high rise hotels but they have maintained the openness of the beach front by building a beach area safe from crocodiles with sand and swimming is allowed.  We didn't swim at the beach as we had other plans.

Alongside the manmade beach they have built a large wave pool.  This is a large pool with depth varying up to two metres.  The waves come in cycles - ten minutes resting and then twenty minutes of very active waves.  The wave pool is open from 10 am to 6 pm daily and we went for the afternoon session from 2 pm.  After two hours of jumping about in the waves Connor was had it and I have to say I was out of the water long before him.  It is an amazing facility and they have made it family friendly by setting the family ticket price at $12.  We had a great afternoon and all came back to the caravan quite exhausted from the heat and the activity.


You will see that there are no photos of Connor in the water - he was hard to identify in the crowds so I gave up! 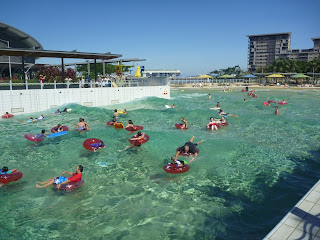 Tomorrow we pack up and head into Kakadu National Park for a few days.
Posted by Just Keep on Traveling at 5:49 AM