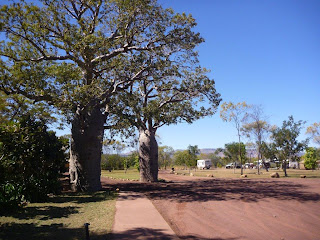 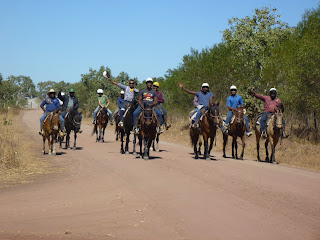 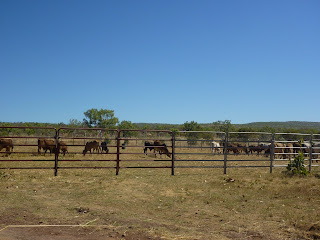 Before we commenced our return journey we had a wander around the
accommodation areas. There were a number of campers relaxing and enjoying
the excellent facilities. As we pulled out through the station gates we
pulled over for a group who were returning from a horse trek. Apparently
they had been out for three hours and a couple of the girls at the back said
that they had sore bums from sitting in the saddles.

The station has training facilities for Aboriginal people and whether the
horse treks are used as a training ground we were not sure, but there were a
number of Aboriginal on the front horses and they were keen to wave for the
camera.

The station is still a working station and although the cattle yard had been
empty when we arrived, there was a herd of young cattle in the yards as we
left.
Posted by Just Keep on Traveling at 5:09 AM