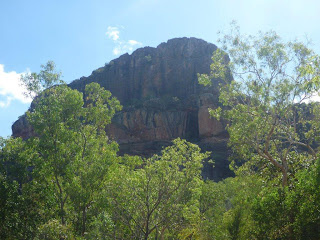 The actual rock at Nourlangi was really large and quite severe with sheer
rock faces of various colours. There is a walk to the top as we saw the
sign saying twelve kilometres (but too far and too difficult for me so we
didn't venture along the track) but we never spoke to anyone who had
actually completed it. Connor thought that rock climbing the face of the
cliff would be easy, and he may be correct, but we were uncertain what he
was basing this statement on. There are no commercial rock climbing
adventures within the park.
Posted by Just Keep on Traveling at 12:11 AM