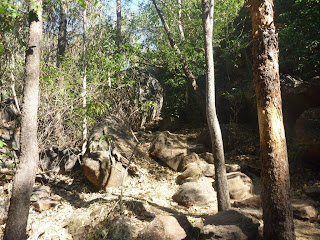 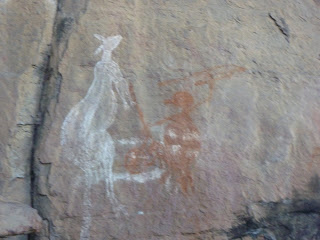 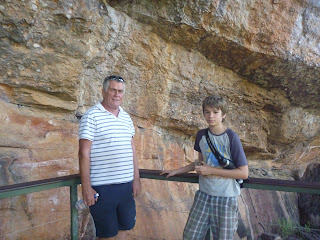 The first photo in this series shows the walk around the various paintings
at Nourlangi Rock. I have included another painting of a kangaroo - we have
been told that the white and the yellow ochre lasts much longer than the red
colouring and this was quite evident. We have many more photos of various
paintings, far too many to include here, but you can tell we were very
interested in this.

And just to prove that we were really there, a photo of Peter and Connor
beside some of the paintings.

The temperatures have been very warm, mostly in the early 30's with humidity
around 60%. Walking in the coolness of the rock was great but it was a
different story as soon as we were out in the open.
Posted by Just Keep on Traveling at 12:11 AM