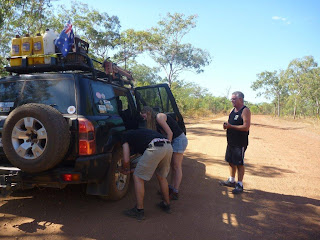 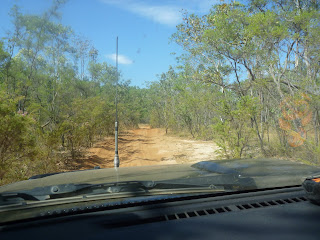 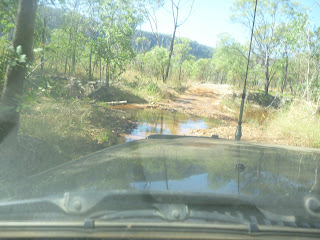 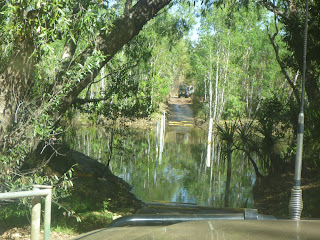 On our last full day in Kakadu National Park we visited both Jim Jim Falls
and Twin Falls. The road to the falls is suitable for four wheel drive
vehicles only and is gravel initially before it deteriorates more.

At the beginning of the road there was a young couple parked beside their
hire van. We were uncertain if they had broken down so Peter pulled over
and they were after a ride out to the falls as they were unable to take
their vehicle. So we sorted out the car and in climbed Julian and Joanna
from Germany who are visiting Australia during their gap year.

As the road deteriorated it was obvious that we would have to let air out of
the tyres. This was a new experience for Connor and our young travellers.
Julian and Joanna were keen to "help" and after a lesson from Peter were
soon letting out the air. Shame they didn't listen to the full explanation
and adjusted the air gauges!

We decided to visit Twin Falls first and this required us to cross a number
of small water crossings and then a much larger crossing - Jim Jim Creek.
This was about a metre deep and the recommendation was to have a snorkel on
the vehicle. Unfortunately the couple ahead of us didn't have a snorkel and
as they were German tourists and unfamiliar with driving through water they
stalled part way across. Crocodiles are in this water and I am sure there
hearts were beating fast. Fortunately after a number of attempts they were
able to get the motor going and inched their way across. (As we returned
from the falls someone was attaching a snatch strap to their vehicle and
towed them across to avoid a similar incident).

We went across the river with no problems and it was a highlight of the day
for Connor and our visitors.
Posted by Just Keep on Traveling at 1:11 AM