The production of Grease, the musical commenced at the Lyric Theatre in the Queensland Performing Arts Centre on the 20 August.  Sharryn and I decided that as we have enjoyed going to many productions, especially while we both lived in Melbourne, we needed to keep up our reputation by booking to go and see Grease.

We chose to go to the matinee on the Wednesday afternoon - mainly because we wanted to take the bus into the city and didn't want to be travelling at night.  Neither of us had clothes that were dressy up, but we did our best - however no leather jackets or bobby socks for us!

The story line of Grease is well known and although neither of us knew the two actors playing the lead roles of Danny or Sandy, we did know the ever popular Bert Newton (who took absolutely no mistaking) played the part of the veteran disc jockey Vince Fontaine.  Another favourite was Todd McKenney (who was one of the judges on the popular Australian Dancing with the Stars television program) who starred as Teen Angel.  The other star we recognised was Anthony Callea who was the runner up of the 2004 Australian Idol however he didn't sing his most popular single "The Prayer". Instead he took the role of the All-American rock star student, Johnny Casino.

The production commenced at 1.30 p.m. and we did well to sort out which bus to catch which took us across Victoria Bridge from the sitting with a stop directly outside the theatre - thank goodness the Brisbane public transport system has a good website.  The bridge looked very bright and inviting with the coloured Grease flags flapping in the wind.
We arrived in plenty of time so that we could join the crowds of people who had the same thought in mind as us - to arrive in time to eat lunch at the cafe in the foyer. From the crowd around us we were with the right group - large numbers of women friends out for an afternoon at the theatre but I must say a lot were dressed to impress. 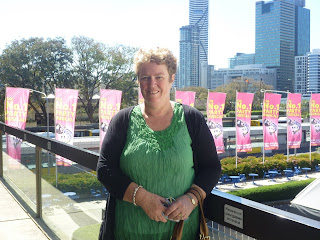 There were no photographs allowed during the production, which is quite normal, but we were able to take a photo of the stage with the Grease lightshow prior to the beginning.  The Lyric Theatre which opened in 1085 was quite impressive and seats 2000.  Although we had chosen to sit in the gallery we had an amazing view as the seating is tiered and not close together, and there were plenty of spare seats so our view was not impaired in any way.  In fact we changed seats at the interval (to save having to walk further up the stairs) and even then we had no one sitting in the same row as us. 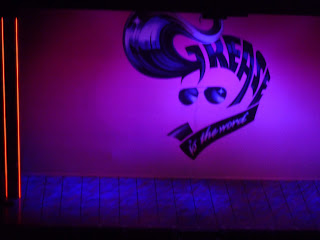 We had a great afternoon.

Next day we decided that lunch out was the norm for us so we made our way to "our local" with is The Gap Tavern.  Here they have an expansive deck with tables and we were able to enjoy a really nice lunch together.  From here we spent the afternoon shopping with the desire of buying an outfit for Sharryn to wear to the upcoming wedding - Toowong Village was our venue.  However, we weren't successful and the only shopping actually purchased was some goodies for Sharryn's grandchildren. 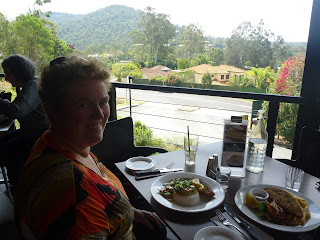 Posted by Just Keep on Traveling at 6:42 PM