A tour with the boys in mind

We had already decided that while we were in Brisbane we would take the XXXX Brewery tour and while Greg and Jocelyn were staying with us seemed the perfect time - certainly something to catch the male interest.

The XXXX brand is well known in Australia so we decided to take the classic brewery tour.  The brewery is located in Milton which is near the city centre and not that far from The Gap.  The signage can be seen very well from the freeway so very inviting.  It is also in the same vicinity as the Suncorp Stadium. 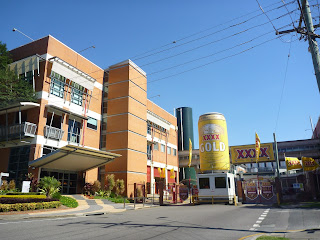 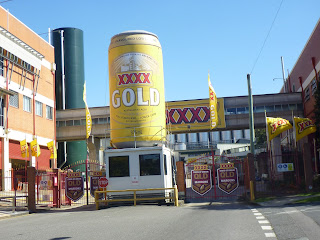 Beside the large XXXX which can be seen far and wide, the other icon of this business is Mr Fourex - it appears that no one knows who he is modelled on but he is certainly part of the branding. 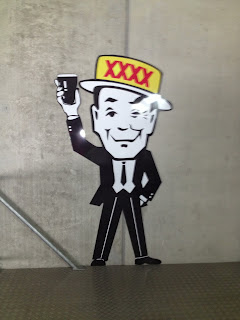 The brewery is now owned by the Lion Nathan group but operations first commenced on the current site on Milton Road (which is one of the main arterial roads into the CBD) since 1878.  We understand that during the January 2011 flood low lying parts of the brewery were filled with about two metres of water.

The tour commences in the obligatory tourist shop where tickets are purchased - $25 for drinkers and $23 for non drinkers (these are the senior/concession rates).  I suggested to Peter that I buy the drinkers ticket but he said no and we were pleased later.  The tour commences with a video and then a guide joined us (there were three others besides us) and we were taken into the factory.  With high viz vests, closed in shoes (provided at reception if necessary), and ear protection I felt that I was back at work visiting one of the CHH sites!  The only thing missing was the hairnet.

The tour guide was very informative about the history and brewing process and a stop off at a picture gallery with clear signage was made. 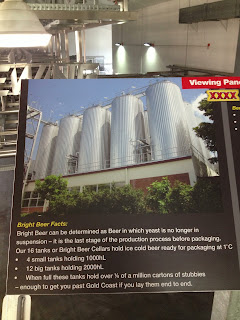 We were taken along a viewing platform so that we could see the main bottling and packaging areas.  Unfortunately they were not bottling but the packaging lines were operating. 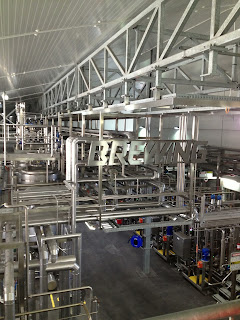 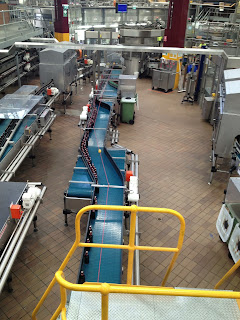 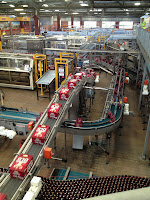 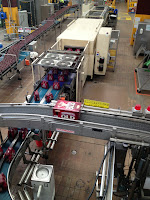 The tour ended in the Ale House (which is a pub and restaurant also open to the public) where you may have guessed you can taste the product.  The drinkers ticket allowed for four 285 ml glasses of on tap beer of your choice and the non drinkers were allowed the same number of soft drinks.  Four drinks was more than enough and in fact Peter and Greg stopped before four. 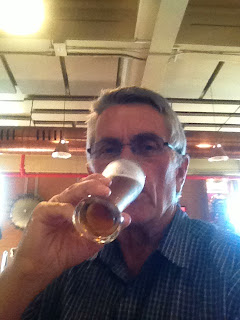 It was a lovely relaxing place to sit and chatter and with the purchase of nibbles from the bar was a nice place to spend an hour or so.  Was the tour great?  Well it was okay but I felt it was like paying to visit one of the sites I visited every day, just a different product.  However, for those with a keen interest in beer or little knowledge of a processing plant it would be interesting.  I think the main drawcard is the product and the tasting at the end - remember anyone can visit the Ale house without going on the tour but the purchase of the drinks may equate to the same price as the tour with them included. 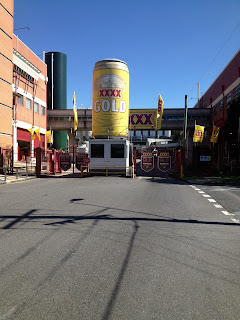