A short visit to the Gold Coast


We have previously holidayed on the Gold Coast at least four times and we didn't have any plans to stay there this trip to South East Queensland.  Instead we decided to make a day trip.  We took a picnic lunch with us and stopped off at Southport in the park opposite Australia Fair Shopping Centre and as it was a beautiful day it was very pleasant sitting near the water.

At present there is a light rail system being constructed which will link Griffith University in the north with Broadbeach south of Surfers Paradise a distance of thirteen kilometres travelling through Southport and Surfers Paradise.  The construction reported to be costing in excess of $1.4 billion dollars has been is due for completion in 2014 and the trams will operate 24 hours a day, seven days a week.  The first trams are due on the lines in about four weeks as trials get underway but up until now the light rail has just caused chaos.  The construction has caused extreme traffic congestion for many months now and we could understand the local people's frustration as the route follows the main road from Southport to the centre of Surfers Paradise before it heads towards the beach and will stop currently at Broadbeach.  Driving in the area is certainly hazardous.

We headed to Main Beach where we parked and took a walk along the foreshore.  By then it was quite windy and not very pleasant walking.  There were a few people keen enough to go swimming but not many.  We stayed at Main Beach when we visited Brisbane for the World Expo in 1988 and it is a lovely area - the apartments we stayed in then don't look any different now so they obviously keep up their maintenance schedule and bought twenty years supply of the same external paint! 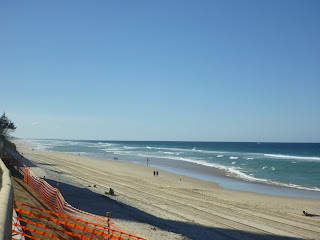 We continued along the beach road to Surfers Paradise however we didn't go walking as parking was at an absolute premium and none were to be had.  Nothing much has changed since last year, the re-construction of Cavill Avenue shopping precinct opposite the main steps to the beach front is still continuing and the whole area seems to be a mess, unfortunately.  Perhaps next time we are in the area both the light rail and these renovations will be completed.

However, there is no mistaking that this is Surfers Paradise with the high rises all along the foreshore and it still holds a special charm. 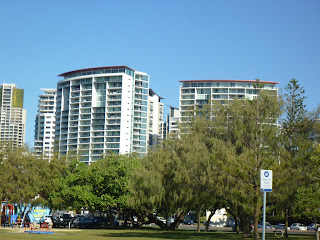 Posted by Just Keep on Traveling at 12:05 AM