A visit to EKKA

In the time that we have been in Brisbane we have seen a lot of advertising, on television, in the newspaper and bill boards for EKKA.  Initially we had no idea what EKKA stood for but it didn't take much guessing - this is the annual agricultural show of Queensland.  Its formal title is the Royal Queensland Show held at the Exhibition Ground.  It is commonly called EKKA which is apparently a shortened version of exhibition (but not in my language!).

It is the largest annual event held in Queensland and it seems that "everyone" attends.  It is held over a ten day period and apparently over 400,000 people attend.  This year, two of those attending were us.

We purchased tickets on line in advance and then took the bus from just down the street and with only one bus change we had just a short 300 metre walk.  We had left home around 9 am so that we were early and we were surprised at just how many people were already at the grounds when we arrived - these numbers just continued to increase throughout the day.

We entered through a side gate and this took us through the children's side show alley first.  It was a school day so there weren't too many children about although one lady said to us that she always took her children out of school for a day to visit rather than go on show day or the week-end.  Of course there were the normal fairy floss (candy floss), hot dogs and lots of chip stalls in this area. 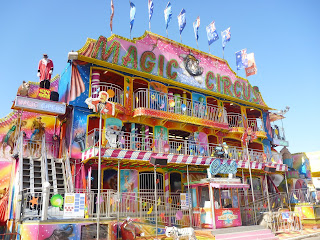 With no children accompanying us we were able to quickly leave this area behind.  As the show is an agriculture show we headed to one of the many pavilions.  Here there were a large number of a variety of animals on show - and big animals.  We watched a horse display, with stalls showing a variety of different horse breeds from draught horses to Shetland ponies.   Of course the animals were beautifully presented with an attendant keen to explain all the details of the particular breed. 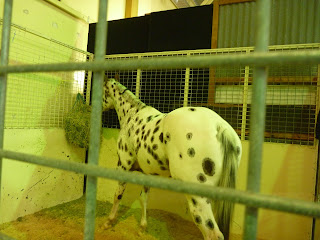 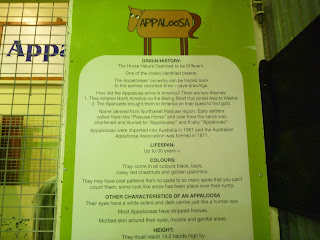 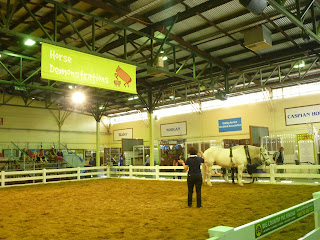 There were a large group of teenagers, all in their school uniforms, sitting on tiered seating and watching a screen  We soon found that it was an interactive classroom with one of the large cattle stations situated a long way out west.  The students were able to ask questions and the station staff were responding.  What a great way for the students to learn direct.

The pavilion reminded us of what a visit to the New Zealand National Field Days would be like - our son-in-law is a regular volunteer at those field days in Hamilton and our daughter and grandchildren always look forward to their visits.  As they are dairy farmers we had a peek at the cattle on display - far too many to take too many photos. 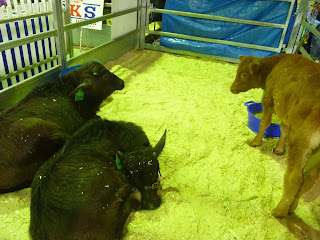 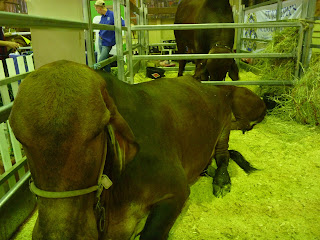 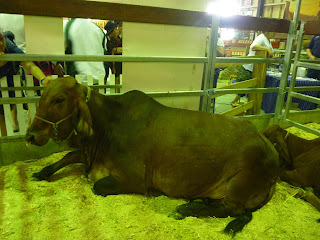 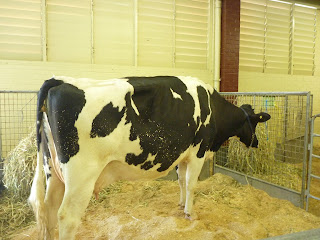 The variety was amazing and it was good to see a group of wool spinners displaying their work.  I was a member of the Upper Hutt Spinners and Weavers Group for a number of years and enjoyed many spinning events where such displays were always available. 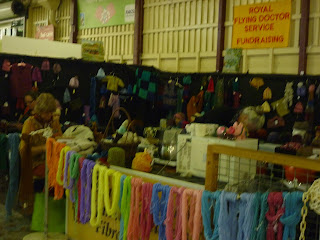 The smell of the animals was getting to Peter - he really isn't a true country boy, so we wandered back outside without going through any more of the animal pavilions.  It would have been easy to remain in this area all day.  A very popular part is where there is an animal nursery with lots of baby animals and the children are allowed to enter and touch, interact etc.  A great opportunity for many city children that might not otherwise ever see these animals other than on television or in a book.

Along with animals there were displays of plants and fruit and vegetables.  I wonder what happens to all the vegetables after the show - some would still be all right but others???  Surprisingly there was no refrigeration apparent. 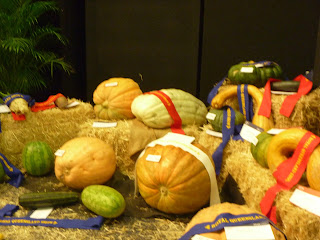 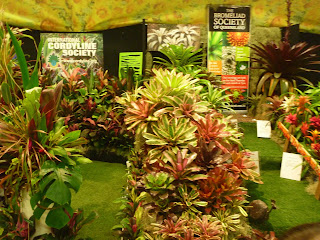 The dog show is run over the entire ten days of the event and appeared to be one of the most popular for public participation.  There was tiered seating so that the public can watch the dogs being paraded and judged. 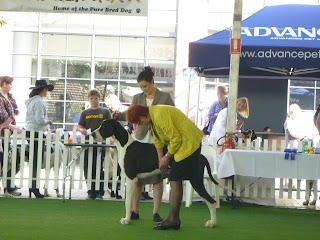 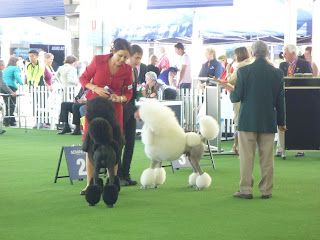 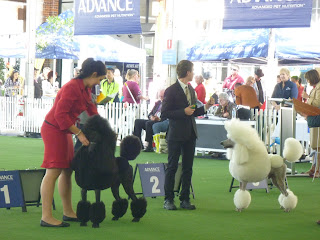 We watched for half an hour or so before entering into the main pavilion where the dogs and there owners "camped" for the days of the show.  The puffing and preening of the animals was just amazing.  With a variety of brushes and combs and hairspray, and obviously the use of clippers, the dogs were prepared for the judging ring. 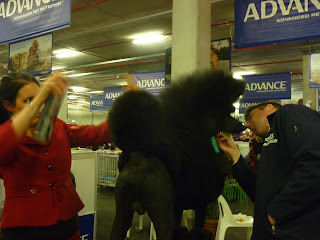 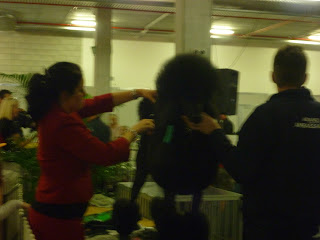 The diversity of the exhibition pavilions was quite amazing and we spent 95% of our time at the show in various pavilions.  Vintage vehicles always appeals to Peter but unfortunately there weren't too many on show.  There were a few of the motor vehicle dealers with new models of vehicles on show as well - perhaps the Patrol replacement should have been bought from here? 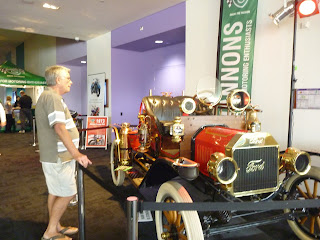 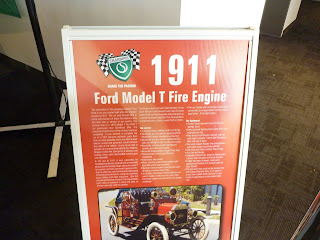 We came across this living statue on a number of occasions - he certainly was good.  Imagine being able to stand that still for what seems like hours and to totally ignore the stares and comments. 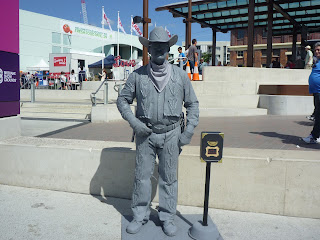 The exhibition pavilions seem to go on and on - we had hearing tests (and we were both reassured that our hearing is in the excellent range, especially for our ages), back massages and a chiropractic assessment.  That wasn't quite so good for me (additional weight bearing on my right in protection of my left knee) and recommendations to seek x-rays and treatment (which I said no too - I will see the specialist in Melbourne in October) but for Peter who has had years of back pain he got the all clear. Excellent - however I am sure he is keen to visit with Bruce, his friendly chiropractor, on our return to Melbourne.  There was food and food and food - free samples of a variety of foods and of course lots of stalls to buy lunch etc.  Most impressive.  The next exhibition pavilion we went into surprised us both.  We knew it was an agricultural show, and had already seen the baking, the cake decorating, the jams and pickles etc but to see huge hunks of raw meat - something I have never seen at a show before. 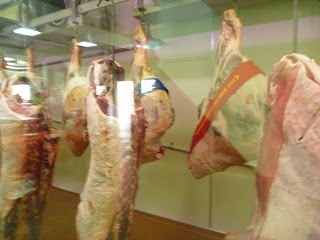 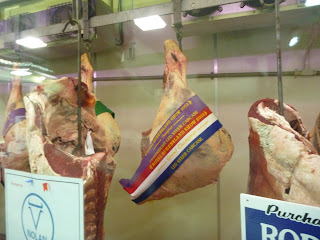 We were getting to the point where going home was high on the agenda but I hadn't seen the show bags.  Show bags are a very popular purchase item for most people who visit shows in Australia (we hadn't seen this in New Zealand prior to living in Australia) and it is common to see people walking around the show with a number on their arm.  A variety of show bags are taken to a selected school for the children to compete and decide which are the best bags.  We were surprised at the number of show bags on sale, and the as they catered for all ages there were plenty of shoppers. 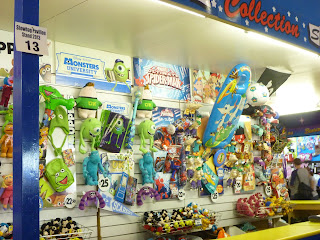 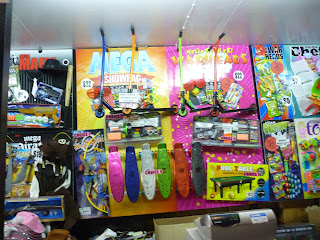 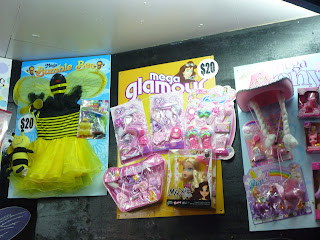 As the show bags pavilion was close to a railway station we decided it was time to head for home.  However a quick walk through sideshow alley was necessary just to reinforce that we were at a show catering for everyone.  It had all the usual and lots of queues to go with them.  Not for us that was for sure.  Instead we headed to the train and soon we were swapping to the bus to The Gap and heading home to the welcome of Toby.

It was a great day out and we were really pleased we had visited.  There was certainly something for everyone there and we could understand why it was so popular.  It was the biggest show we have been too.


Posted by Just Keep on Traveling at 1:07 AM

Email ThisBlogThis!Share to TwitterShare to FacebookShare to Pinterest
Labels: Brisbane