Our first view of the limestone pinnacles 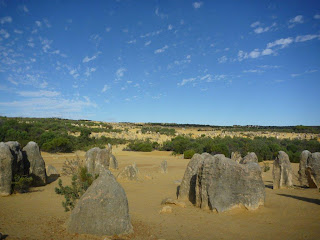 The next place of interest we went to see was The Pinnacles in the Nambung
National Park. This national park is just six kilometres off the Indian
Ocean Drive and many visitors to Perth come to see The Pinnacles on a two
day trip. The pinnacles are limestone formations ranging from a few
centimetres tall to a few metres high. They were formed over time from lime
discharging from the sand and from the rain having a cement effect. The
pinnacles are not limited to just a very small area - there are literally
thousands of the limestone pillars which gives the area an eerie feeling.
There are panoramic viewing areas and a short 1.2 km return walk through
some of the pillars and also a four kilometre one way driving loop. We took
the driving loop (after having to off load the caravan) and we were really
pleased that we did. There were parking bays along the way so that we could
stop and wander off in different directions. They were truly amazing.

We also visited the interpretive centre to find out more about the pinnacles
as we were uncertain whether they were termite mounds (as we had seen in
Queensland and the Northern Territory) or were actually limestone. The
interpretive centre is extremely well set out with photos and explanations -
well worth the time. Many of the national parks have specific camping areas
but unfortunately Nambung is not one of them. We would have loved to have
stayed on and seen the limestone pillars in differing lights.

Back in Esperance we had purchased a twelve month national parks pass for
Western Australia as most of the parks have an entry fee. This was
worthwhile as we have already broken even on the cost of the pass versus
entry fees and we still have a lot of Western Australia to visit.

Posted by Just Keep on Traveling at 9:44 PM