A visit to Kalgoorlie

On Monday morning we arrived at Kalgoorlie and booked into the Discovery Caravan Park. We had planned to initially stay for a couple of days but then changed our mind and stayed until Thursday. On Monday it was unbearably hot with the temperature hitting 40 degrees late in the afternoon. It was certainly too hot for sightseeing so we relaxed and don’t be shocked, we went for a swim in the park pool. Anyone who knows me well will know that it is very rare for me to go in the water!

Our other task for the afternoon was that Peter was keen to have a haircut and he certainly achieved that. I don’t think I have ever seen his hair so short, and it is still taking him some adjusting to the view in the mirror! Perhaps next time he will not ask for a number four all over.
Kalgoorlie and Boulder are two towns very close together built around the mines, and they now both join. However there are two main streets, two historic town halls etc. Unfortunately there was a 5 magnitude earth quake in April 2010 and the historic buildings in the main street of Boulder appear to have suffered the most damage. Many of the buildings, including large hotels and other historic buildings, are now cordoned off due to the damage. Apparently it is going to cost many millions of dollars to undertake these repairs. As we walked along Boulder Main Street we were told about a mine that could be viewed from the bar of one of the hotels – there is a glass viewing area showing the eleven metre mine below the hotel. It was just so amazing.

Tuesday morning was cooler at 34 degrees so we were ready to go sightseeing. First stop was the local Royal Flying Doctors Service. We have visited two other regional quarters but decided we respect them so much we would like to visit again. We were so pleased we did. The volunteer who showed us around was a very interesting lady named Heather. She and her husband had managed a one million acre farm, with 65,000 sheep, on the Nullabor close to the Western Australia/South Australia border from the time of their marriage in 1960 until retirement. She was able to give firsthand experience of living and working on the land and raising children and the value of the RFDS to them as a family and as an employer. She explained the isolation and said that their mail box on the Eyre Highway was nineteen kilometres from the homestead and the support that they had from the RFDS was tremendous just to know that in an emergency they could get help. She made the visit really interesting. We were also able to go out into the hangar and see two of the planes currently in use in Kalgoorlie. We were so pleased we had made the visit as previously Peter had been very disappointed not to see any of the actual planes.
Kalgoorlie has quite a number of mines in the surrounding district. However right in town there is the “super pit” which is a huge mine that is expected to continue to mine gold until approximately 2021. The super pit has a public lookout and from here you can get an idea of the actual size of the mine and watch the trucks as they collect their loads and take the approximate twenty minutes as they haul up the mine road to dispose of their load. There is a daily blast but although we visited twice at the time the blast was scheduled we didn’t see it actually go off.
Eighteen kilometres out of town we visited a historic cemetery – this was in an area where there had been a significant gold find in the late 1800’s. Now there is only a fenced off cemetery and nothing left of the township that had sprung up in the area. The red dirt of the area certainly stuck to our feet.

From here we continued to see the Barrick gold mine which is still working but is much smaller than the super pit. From the public lookout we could get a good view of the mine pit and the working vehicles. We also visited the processing plant but as the lookout is only of the outside we couldn’t see much. I was pleased to see the company commitment to health and safety so prominently displayed and as the entrance there was an alcohol analyser – we both gave it a try and no surprise we were clear.
Kalgoorlie, which has approximately 32,000 people, has a reasonable size shopping area but still with an excess number of hotels. Kalgoorlie is apparently the largest regional town in Western Australia. The main street is very wide and we understand that the main roads here and in Coolgardie were built that wide to allow for the camels to be able to turn around easily. There were no camels when we were there!
We visited the Western Australia museum – surprisingly the staff had a dominance of kiwi staff so we were warmly welcomed! Perhaps they know good people when they interview. The museum was well worth the visit. We initially looked through a photograph exhibition – ANZANG Nature Photography and the photos on display are the best of the 1600 submitted including the winners in each category. The subject of the exhibition was the depth and diversity of nature in Australia, New Zealand, Antarctica and New Guinea. It was really interesting.
On display were a number of original buildings from the Kalgoorlie district carefully restored and set in the era. These included a miners cottage, bank, the narrowest pub in Australia and others. Within the museum there was also a gold vault with gold worth more than four million dollars on show. From the mine tower there was an excellent view of the Kalgoorlie/Boulder district.
We have visited a number of parks in the area and have been surprised how green they are. The parks are well cared for and have excellent facilities. One of the parks had a large area set aside for RV’s to be able to stay for 24 hours. As we wanted to be in Kalgoorlie longer than that we stayed at a caravan park but it was an excellent facility. We spent some time at Hammond Park which was lovely and green and had great facilities for families. The park has a large band rotunda which was moved to this park and reassembled. There is also a replica castle which is built in local gemstones. The other feature of the park were the bird cages.

We had been told by some folk we had met when we stayed at Haslam Caravan Park that the best tour in Kalgoorlie was the Questa Casa Brothel tour. This is a tour of a historic brothel which is still operating today. Along with over twenty others we were entertained by the madam, told the history and some of the stories of the establishment and then shown the rooms that are currently used by the four working ladies. We couldn’t quite agree that it was the best tour around but was certainly different. After the tour was completed we headed out of town – next stop Esperence. 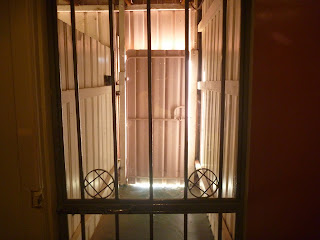 Stalls at the Brothel
Posted by Just Keep on Traveling at 7:25 AM