After our long day going to Cairns we had a very leisurely start today - for Connor this meant the first day he had been able to stay in bed after 9 a.m.  It was not surprising to note that his stomach ensured he didn't stay out of the kitchen for too long! 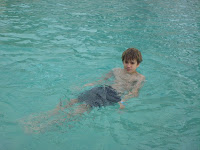 We had asked Connor what he would like to do on his last day in Townsville and he thought that another swim at the Riverways Lagoon would be a good option.  So following a lazy morning we headed to the pool in the afternoon.  As it was a school day there were very few people at the pools but Connor enjoyed the lovely weather and the freedom of the pool. 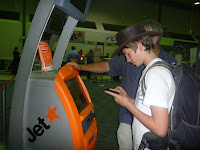 With packing completed and following an early dinner for Connor we headed to the Townsville Airport in time for his check in with Jetstar at 6.30 p.m.  We were surprised at how big the Townsville Airport was and how many facilities they offered.  The one café which a very poor food range at Cairns could do with checking out the Townsville offerings.  There are at least three food stores, book shop and general store and all at a domestic airport.  Most impressive.

Connor flew up to meet us in Darwin last year and together we had returned to Melbourne at the end of his holiday.  This time he had travelled up in the car and was returning on his own.  He was looking forward to catching up with his friends and his Mum and Dad. 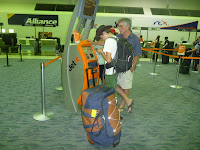 Like we had done with Jake and Tim, we promised to stay at the airport until the flight was in the air.  His 7.35 p.m. flight left roughly on time and he was on his way - a late night for his Dad who will meet him in Melbourne as it is about a four hour flight. So our grandsons have all gone home and we are back to just us - it will seem very quiet for the next few days.  We are house sitting here in Townsville for another four weeks and then we will commence our trip south house sitting along the way in Brisbane and Sydney before arriving in Melbourne on the 5th October ready to house sit there for a month or so. 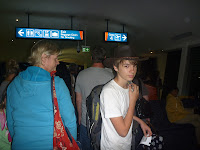 We loved the experience of taking Connor, Jake and Tim along during this section of our travels.  They learnt heaps about the parts of Australia we travelled through, about themselves, about being away from Mum and Dad, about self reliance and self responsibility and these are big learnings for boys aged 8 to 13.  We have built memories for the future for us all and we will always remember our trip through the desert with the three boys.

Posted by Just Keep on Traveling at 12:56 AM