Going through the Simpson Desert - By Jake Lumsden

Jake Lumsden is our nine year old grandson who lives in New Zealand with his parents and younger brother and sister.  The photos below are of Jake and his brother, Tim aged 8, preparing to leave their mum and sister at the Auckland Airport.

They travelled the trip from Melbourne to Townsville via the Simpson Desert with us and this is Jake's account of his trip.
﻿﻿

Today my younger brother Tim and I travelled on our own to Melbourne. Our plane arrived at 5.30pm in Melbourne.  The air host came and got us through customs and through the final doors to where Nan and Grandad were.  The air host checked Nan’s ID so they could tell she was the right person to leave us with. Finally we could go to bed we were really tired. The Patrol was partly packed already we just needed to finish it in the morning.  Connor arrived late tonight once we had gone to bed.  Connor is my cousin that is going to be travelling with us turned up.
The next day we are packed ready to go. Today we are going from Melbourne to Mildura it was 545 km’s. About 20 km’s out of Mildura we had to throw all of our fruit out because of the risk of spreading fruit flies in the area because of the excellent citrus fruit grown in the area.  They grow lots of grapes, limes, mandarins and oranges.


27/5/2013
Today we travelled 380 km’s to Burra. At Burra we saw some fossils at the town council building. There was the skull and part of the spine. 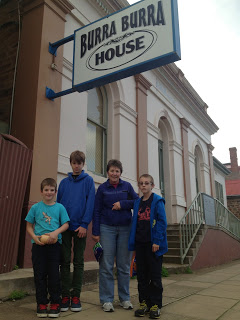 Burra is 150 km’s north of the Mildura and the Murray River.  Also known as the mighty Murray, because when the settlers came to Australia they used the Murray for food E.G fish, transport and water from the river to water their crops but they couldn’t drink it because it is so muddy so they had to find fresh water lakes that leads to the Murray.


Today we travelled 380 km’s to Leigh Creek. Did you know that Leigh creek was built for the excellent coal mining, they fill a 2.8 km train every day and that makes up 50% of South Australia’s power? 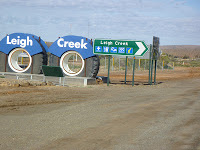 Today we travelled 365 km’s to William Creek. William Creek only has one pub and no shops. Tonight is our first night in the tents and in the tent it will be for the rest of the trip until we get to Townsville. Today I used my fly net for the first time on this trip.
30/5/2013
Today we travelled 380 km’s to Oodnadatta.
Our plans were to stay at Oodnadatta but we continued on to Hamilton station.  The flies there were so annoying.
31/5/2013 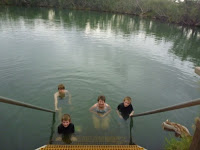 Today we travelled 255 km’s to Dalhousie Springs. At Dalhousie Springs there is a billabong that is 38 degrees hot. In the billabong there was a little type of goby that only lived in that billabong called the Dalhousie goby that nibbled at the dead skin on your feet and when you ran your hand over your feet it was so smooth. During the day the flies were all over you but at night there were mosquitoes which were all over you!

1/6/2013
Today we travelled 150 km’s to our first night in the dessert bypassing Purni Bore. The bore at Purni Bore is 3-5 km’s deep and 85 degrees hot and is filled with mud and animal droppings. After lunch we headed into the Simpson Desert.